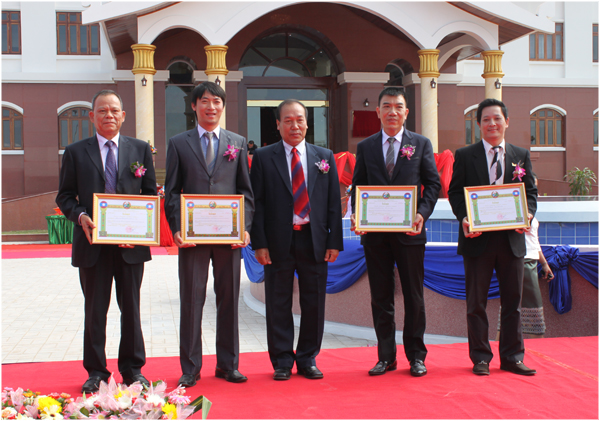 After 30 year-development, Consultant and Inspection joint stock Company of Construction Technology and Equipment-CONINCO has not only confirmed its position in domestic market but also reached out foreign countries through business cooperation with many great companies, groups in the world. With 08 member companies, 01 joint venture company (with Japan) and 01 member company in Lao People’s Democratic Republic, CONINCO has been confirming its strength, CONINCO’s trademark has been believed by domestic and foreign customers.
For 7 years in Laos, CONINCO has performed successfully tens of projects which are major projects in Laos, that has contributed to cultivate the friendship, special relationship between Laos-Viet.
Mr. Nguyen Van Cong – Chairman of BoM cum General Director of CONINCO has shared that in the context of economic integration, widening operation scope, especially reaching out foreign market is very important. After having intention of reaching out foreign market, CONINCO’s BoM discussed and Laos is the country which has got much agreement from members. CONINCO has that choice because Vietnam and Laos have had specially traditional relationship for many years and it is regarded as “invaluable property” of the two countries. Regarding geography, Laos is next to Vietnam, which makes convenient for transport and exchange. Another important matter is that the growth of Laos has been high, about 6,8%/year in current years. However, economic structure of Laos has clear problems, agriculture is still main activity. We understand that with desire of widening cooperation and international integration, authority and people in Laos have been trying their best to develop comprehensively to become a potential destination for foreign partners. Up to now, investment capital of Vietnam enterprises in Laos has got over 3,4 billion VND, in 2011 got 480 million USD, higher than in 2010. There are 163 Vietnam projects in South and middle area of Laos, which gets 78%. At present, we can confidentially confirm that reaching out Laos market is a right choice.

7 years in Laos is the difficult time of CONINCO because of fierce competition in construction market. However, with its prestige and experience, CONINCO has been assigned to perform several major projects such as: office of National Assembly House of Laos, Laos-Viet friendship high school-a gift from Former General Secretary Nong Duc Manh to Laos’ people…Projects which CONINCO has been performing are national projects. With 7 year-continuous effort, CONINCO has not only brought revenue, creat ed works for labours but also contributed to cultivate special relationship between Party, Government and people of Laos-Vietnam.  Therefore, CONINCO has been awarded many noble rewards by Party, Government of the two countries.