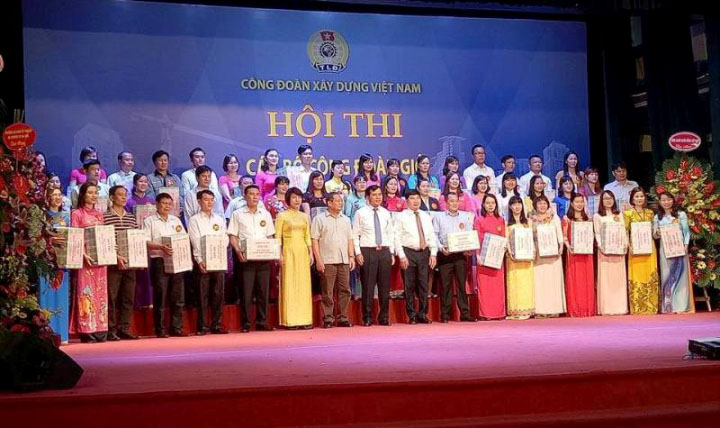 During the three days from September 21st to September 23rd, 2016, the Vietnam Construction Trade Union (VCTU) held a contest Good Union Official under the Construction Industry in 2016 with the participation of 49 contestants who got high achievements at the local contest in three areas of Northern, Central and Southern Vietnam.

Attending the closing ceremony, there were Vice Minister of Construction Do Duc Duy; Chairwoman of VCTU Nguyen Thi Thuy Le and leaders of the Vietnam General Confederation of Labor (VGCL); the affiliating Unions and 49 contestants.

According to Prof. Dr. Vu Quang Tho - Director of the Institute for Workers and Trade Unions, the two days of the Vietnam Construction Trade Union contest attracted a large number of members with the topic which promoted and encouraged workers to join the Union in many creative ways.

These were outstanding trade unionists who contributed positively to the construction industry. With the responsibility, the judges fairly worked and accurately assessed each contestant. The viewers also expressed high enthusiasm to encourage contestants to show their talents and get excellent results.

From the local competition, many units in the industry organized the contest on a large scale, diversified forms, well prepared from contents, programs to preparation. The contest helps to strengthen the knowledge, solidarity and cohesion amongst trade union officials and members of the units as well as received the attention of leaders of the Party Committee and unit leaders, the cheers of a large number of employees and union members.

The organizing committee gave the two first prizes; 02 second prizes; 03 third prizes; 9 consolation prizes; 33 prize for movement and 03 prizes to contestants with the most excellent performance.

As the best contestant with the most excellent performance in the Ministry of Construction 2016 Trade Union Contest, Mr. Pham Quang Hong from CONINCO won the Most Excellent Talent Prize and Consolation Prize at the National Contest of Good Union Official under the Construction Industry in 2016.